Obi; or the History of Three-Fingered Jack. In a series of letters from a resident in Jamaica to a friend in England.

Browse > Obeah Narratives > Obi; or the History of Three-Fingered Jack. In a series of letters from a resident in Jamaica to a friend in England. 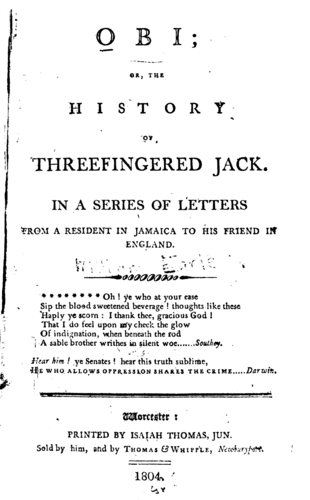 Title
Obi; or the History of Three-Fingered Jack. In a series of letters from a resident in Jamaica to a friend in England.
Creator
Earle, William (Narrator)
Abstract/Description
William Earle's Obi is a sentimental and episodic interpretation of one of Jamaica's folk heroes: Jack Mansong, a runaway slave and Maroon leader. Following the first London edition of Earle's novel, Obi was also published in 1804 by Isaiah Thomas, Jr. in Worcester, Massachusetts. Outside of these two editions, excerpts from Earle's novel were also included in several pamphlets and chapbooks, anonymously published in London in 1829.
Publisher
Second Edition - Worcester, MA : Printed by Isaiah Thomas, Jun. Sold by him, and by Thomas & Whipple, Newburyport, 1804
Language
English
Subjects and keywords
Narratives
Obeah Narratives
Epistolary Novels
Mansong, Jack
Mansong, Amri
Makro, Mansong
Jamaica
Blue Mountains, Jamaica
West Africa
Permanent URL
http://hdl.handle.net/2047/D20235145
Date created
1800
Citation
Earle, William. Obi: Or, The History of Threefingered Jack. In a Series of Letters From a Resident In Jamaica to His Friend In England. Worcester, MA: Printed by I Thomas, jr., 1804
Copyright date
1804
Use and reproduction
The digital edition is freely available for public download and non-commercial redistribution.
Restriction on access
This digital edition has limited access restrictions. View the terms of access at http://ecda.northeastern.edu/
Acquisitions source
HathiTrust: https://catalog.hathitrust.org/Record/008677331;

Obi; or The History of Three Fingered Jack (1804): A scholarly Introduction

By: Elizabeth Polcha and Kate Simpkins

William Earle Jr.’s epistolary novel, Obi was first published in 1800 by Earle and Hemet in London. According to Srinivas Aravamudan, little is known about the life of William Earle Jr., outside of his career as a writer in England, which was controversial in that he was accused of plagiarism and defamation. Obi is a sentimental interpretation of Jack Mansong, a runaway slave and Maroon leader. Articles published in the Jamaican newspaper The Royal Gazette between 1780 and 1781 indicate that Mansong lived in the Blue Mountains of Jamaica and led a group of around sixty Maroons, who reportedly subsisted mainly through the robbery of travelers. Earle’s epistolary novel begins with the narrative of Mansong’s mother, Amri, whose story of enslavement galvanizes Mansong’s revenge and rebellion. Amri’s narrative details her capture, along with that of her husband Makro, by slave traders in West Africa and the hardships they suffer on the middle passage to Jamaica. Makro dies on the journey, leaving a pregnant and grieving Amri to give birth to and raise Jack while enslaved on a plantation in Jamaica.

Earle drew on numerous sources for details concerning Jamaica, West Africa, and Mansong, including Bryan Edwards’ History, Civil and Commercial, of the British Colonies in the West Indies (1793), Mungo Park’s Travels in the Interior of Africa (1799), and Benjamin Moseley’s A Treatise on Sugar (1799). As a doctor living in Kingston, Jamaica between 1768 and 1784, Moseley had first published A Treatise that included his own narrative interpretation of Jack Mansong’s life, based on varied Jamaican newspaper stories. Earle’s Obi and Moseley’s Treatise together became sources for several other fictionalized accounts of Mansong, such as William Burdett’s Life and Exploits of Mansong (1800) and John Fawcett’s pantomime Obi, or Three Finger’d Jack (1800). Following the first London edition of Earle’s novel, Obi was also published in 1804 by Isaiah Thomas, Jr. in Worcester, Massachusetts. Outside of these two editions, excerpts from Earle’s novel were also included in several pamphlets and chapbooks, anonymously published in London in 1829.

Scholars such as Diana Paton have argued that Earle’s novel, as well as the proliferation of other prose and theatrical representations of Mansong, functioned to undercut “the potentially strong antislavery case...made through the heroic outlaw figure” (43). The domestication and vilification of Mansong that occurs in these texts, scholars argue, served to allay British fears of slave rebellion in the colonies at a time when the Haitian Revolution began to overturn the French plantocracy. Along with the complex portrayal of slavery and rebellion in Earle’s novel, scholars have been interested in the novel’s portrayal of obeah, and in Amri’s revenge narrative.

Paton, Diana. “The Afterlives of Three-Fingered Jack.” Slavery and the Cultures of Abolition: Essays Marking the Bicentennial of the British Abolition Act of 1807. Edited by Brycchan Carey and Peter J. Kitson, D. S. Brewer, 2007.