The History of Jamaica or, General Survey of the Antient and Modern State of that Island: with Reflections on its Situation, Settlements, Inhabitants, Climate, Products, Commerce, Laws, and Government, vol. 1

Browse > Obeah Narratives > The History of Jamaica or, General Survey of the Antient and Modern State of that Island: with Reflections on its Situation, Settlements, Inhabitants, Climate, Products, Commerce, Laws, and Government, vol. 1 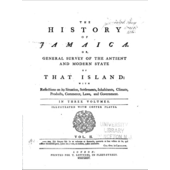 The History of Jamaica or, General Survey of the Antient and Modern State of that Island, Volume I (1774): A Scholarly Introduction

Renny, Robert. An History of Jamaica with Observations. J. Cawthorn, 1807.

Goveia, Elsa V. A Study on the Historiography of the British West Indies to the End of the Nineteenth Century. Howard University Press, 1956.

McCusker, John J. Rum and the American Revolution: The Rum Trade and the Balance of Payments of the Thirteen Continental Colonies, 1650-1775. Garland Publishing, 1989.

Morgan, Kenneth. “Materials on the History of Jamaica in the Edward Long Papers held at the British Library: An Introduction to the Microfilm Collection.” Microfilm Academic Publishers, 2006.