The History of Jamaica or, General Survey of the Antient and Modern State of that Island: with Reflections on its Situation, Settlements, Inhabitants, Climate, Products, Commerce, Laws, and Government, vol. 3

Browse > Obeah Narratives > The History of Jamaica or, General Survey of the Antient and Modern State of that Island: with Reflections on its Situation, Settlements, Inhabitants, Climate, Products, Commerce, Laws, and Government, vol. 3 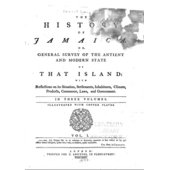 The History of Jamaica or, General Survey of the Antient and Modern State of that Island, Volume III (1774): A Scholarly Introduction

Renny, Robert. An History of Jamaica: With Observations on the Climate, Scenery, Trade, Productions, Negroes, Slave Trade, Diseases of Europeans, Customs, Manners, and Dispositions of the Inhabitants. to Which Is Added, an Illustration of the Advantages, Which Are Likely to Result, from the Abolition of the Slave Trade. London: Printed for J. Cawthorn, 1807.

Goveia, Elsa V. A Study on the Historiography of the British West Indies to the End of the Nineteenth Century. Washington, D.C.: Howard University Press, 1956.

McCusker, John J. Rum and the American Revolution: The Rum Trade and the Balance of Payments of the Thirteen Continental Colonies, 1650-1775. New York: Garland Publishing, 1989.

Morgan, Kenneth. Materials on the History of Jamaica in the Edward Long Papers held at the British Library: An Introduction to the Microfilm Collection. Wakefield, UK: Microfilm Academic Publishers, 2006.