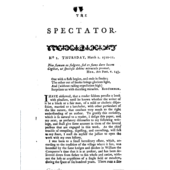 Title
The Spectator Collection (1767)
Creator
A. Duncan and Co.
University of Virginia
Title
Steele, Richard, Story of Inkle and Yarico
Creator
Steele, Richard (Author)
Northeastern University
The Spectator
Abstract/Description
This is a transcription of Richard Steele's The Story of Inkle and Yarico. The two main characters, a sailor named Thomas Inkle and an indigenous woman named Yarico are borrowed from Richard Ligon's Ligon's A True and Exact History of the Island of Barbadoes from 1657. In this version published in The Spectator in 1711, Steele transforms Ligon's allegory about the inconstancy of love, into a story about the horrors engendered by the hyper-capitalism of the slave trade. While Steele cites Ligon as his main inspiration for this tale, it is known to be an oft-repeated folklore. In fact, the story was later turned into a very popular comic opera that saw modern revivals in the 20th century.
Publisher
Second Edition - Glasgow : James Knox, William Marshall, and James Duncan, 1767
Language
English
Subjects and keywords
Narratives
Indigenous Narratives
Early Caribbean Slave Narratives
Folklore
Barbados
Permanent URL
http://hdl.handle.net/2047/D20238869
Date created
1767
Citation
Steele, Richard. "Inkle and Yarico." in The Spectator, Issue 11. London, 1711.
Use and reproduction
The digital edition is freely available for public download and non-commercial redistribution.
Restriction on access
This digital edition has limited access restrictions. View the terms of access at http://ecda.northeastern.edu/
Acquisitions source
http://catalog.hathitrust.org/Record/009783233